Links of Value to Me

Freedom and the Christian Ideal 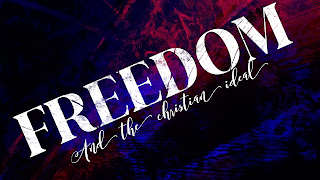 "When in the course of human events, it becomes necessary for one people to dissolve the political bands which have connected them with another, and to assume among the powers of the earth, the separate and equal station to which the Laws of Nature and of Nature's God entitle them..."

And so, with these beautifully penned words at the outset of perhaps one of the most impressive letters ever written, began what has now become an almost 250 year love affair between the United States of America and the notion of freedom.

This love has produced perhaps the most impressive form of government ever seen on Earth. One that is "of the people, by the people, and for the people." It has brought about ingenuity, a pursuit of justice, a love of liberty, and a defense of the ideals of individual value and security around the world. It has made this land the greatest place to live in the entirety of human history.

And, it has given itself over to a massive misunderstanding on the part of the inhabitants of this great nation: we've become convinced that independence and freedom are the same.  They are not.

What I fear is this: in our pursuit of defending freedom, we (conservative, white, evangelical Christians) have begun to worship at the altar of independence.

Nowhere in the founding documents of our country does it say that independence is what those great minds were actually searching for. They wanted freedom. Freedom to live, to participate in government, to be part of the process, to have representation, to pursue life, liberty, and happiness. This is what they wanted. They wanted to have that in the context of existing as part of the British Empire, the greatest country in the world at that time. When this was found to be impossible, they pursued independence as a way of preserving freedom. Independence was a necessary means to an end.

Why is this such an important distinction?  Because if there is one thing the first 6 months of 2020 has taught us, it is this: Some Americans hate being told what to do. Hate it. Like, really hate it.  And, sadly, many of these who so hate being told what to do hail from our tribe (us conservative, white, evangelical folks).  While Christians should be at the forefront of focussing on the greater good and willingly sacrificing our preferences for the needs of others, we instead have seemingly become some of the loudest voices of complaint for not getting our own way.

We are told "You have to wear a mask to help protect others."

We respond with "You can't make me and the science behind masks is bogus."

We are told "Businesses and schools need to close to stop a possible pandemic spread."

We respond with "You are Nazis who are taking away my rights."

We are told "The African American community is reeling and suffering."

We respond with "my life matters as much as theirs."

We are told "The Confederate flag sends a harmful message to black America".

We respond with "don't tell me how to celebrate my heritage."

And with each of these we hear uttered that foundational statement of our culture: "It is a free country.  If what I do offends you, ignore it, but don't tell me how to live my life."

The message those words really send is this: "I'm not responsible for how my actions make you feel."

And maybe, when wars of independence are needed in order to sustain freedom from oppressors, this mantra is fair. But, let's be honest.  Wars for independence come along maybe once every lifetime or two.  Our own story has seen 244 years pass since we had to fight that fight.  When people, especially anyone who claims the authority of Jesus Christ in their life, use this as an excuse to be able to say, do, or act however they want without concern for how others perceive that behavior, we have gone too far. We have exchanged the beauty of freedom (liberty and justice for all) for the selfishness of independence (what is convenient for me).

In theology, we  sometimes speak of salvation (which one could easily exchange for the word freedom) in two ways. Salvation from sin and salvation to good works (or Spirit filled living).  In other words, God frees us from the bondage and eternal consequences of our sinful behavior and this freedom allows us to then pursue the life we were really intended to live: one of righteousness and love.

I believe the same application can be made in our culture today.  We are free. Free from oppressive dictators, from police states, from generational monarchs, and from religious persecution.  But we are also free to do certain things.  Free to love our neighbor. Free to love our enemy. Free to vote for what is best for the whole, not just best for me. Free to worship. Free to be engaged in sociopolitical processes that really help all people.  Freedom becomes the vehicle by which we work for the good of others, not the good of ourselves.

None of our precious freedoms in this country mean a blessed thing if we are so busy worshipping our own independence that we can't get over our selfish desires in order to care about the needs of others. Jesus put it this way: "The second greatest commandment is this: to love your neighbor as yourself." Not that you should love your neighbor so long as doing so doesn't infringe on your own identity or comfortable status.  Love them like you love yourself.

I argue that the notion of independence as a God given value is found nowhere in Scripture. Freedom, yes. Independence, no. Because independence must always bow to the rule of divine love. My independence is not nearly as important as my caring for others.  We are bound to the rest of humanity by the Good who created us all. And our desire to imitate Him must lead us to care primarily about them, whether we are comfortable with it or not.

We Americans also confuse the ideals of freedom and control. Just because something is out of our control does not mean we have lost our freedom. It may mean that in order to best protect freedom for the whole, control cannot be given to each individual.

Let us consider an example: I know my black brothers and sisters feelings towards all that the Confederate flag stands for.  I know I have the freedom to fly it or not to fly it. But, because I'm not an independent person, because I'm called to bear their burdens, and because I love them like I love myself...I cannot condone flying that flag.  My freedom pushes me away from independent thinking and drives me to pursue what is genuinely best for someone else. I'm not a unit of one. I am part of a heavenly brotherhood.

I am sickened when I hear people of Christian faith defend any selfish actions by saying "it's a free country." The last I checked, we were citizens of a greater country. One whose builder and maker is God. A kingdom whose own prince set aside His heavenly  glory and came to earth to willingly sacrifice Himself for us who rebelled against His rule.

And that country is not only some far off futuristic mansion in the sky. It is also the kingdom of heaven that is at hand. Right now. Some people may be shocked to find that their place in that future eternal kingdom may be predicated on their behavior towards their fellow man in this present one.  As Jesus put it in the Gospel of Matthew, there will come a day when those who are denied entrance into eternal glory will discover to their horror that it was their treatment of "the least of these" that determined their forever destiny.

God's primary interest in every area of our lives is that we would become more holy. That we would look more and more like Him. This certainly also pertains to our residency as citizens of this country. Our independence, our individualism, and our preferences are all secondary.  They are valuable, perhaps, but secondary.  God wants to make us holy.  And we cannot be holy while being focussed on ourselves.
What we mean when we use the excuse "it is a free country" is that it is one full of independent people. And that, my friends, is a dangerous reality. We are free. Yes we are. Whoever the Son sets free is free indeed. Free to serve others. Free to care about others feelings. Free to be inconvenienced for the sake of the whole. Free to love.

We must love one another. We must care more for others than ourselves.

It's the Christian thing to do.

Who Is Wesley? (for John Wesley see other sources)